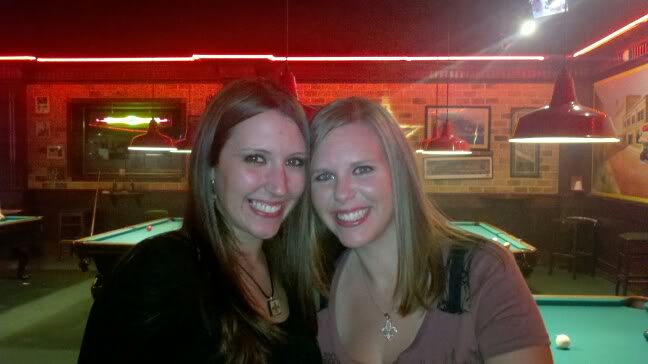 But not the kind of double date you’re thinking. This was another lunch date with the less fortunate members of society. What made this time unique was that I took a pair of sisters to lunch who were collecting money at a stoplight.

As I left the house to look for someone to take to lunch it felt somewhat routine. Like taking someone on a third date. There’s still excitement, but you have at least some semblance of an idea of what you’re doing. So I start checking intersections, and as before, saw someone that I had seen previously. It was at the intersection where I had taken someone out last time. Only it wasn’t the guy who came with me, it was the guy who had turned me down(John). This put me in a slightly odd situation as he was clearly in need(it was like 22 degrees farenheit), but I had already seen him, and he had turned me down. So I figured he probably would turn me down again.

Having made the decision to find someone else, I drove on, and a few intersections beyond him I saw what at first glance seemed to be two high schoolers collecting money for something on opposite sides of an intersection. They weren’t homeless, but if they were out here there was a decent chance they knew where the homeless were. So I pulled into a nearby parking lot and headed out to greet the first ‘high schooler’.

Upon approaching I saw that first of all, she was at least ten years older than me, and second, that her sign was about needing money, and not about collecting for a cause. So I quickly flipped my mental script from ‘hey, have you seen any homeless around here?’ to ‘Hey, I don’t have any cash on me, but do you want to get some food at that Panera?’. It became very obvious that she spoke virtually no english, so we had an amusing interchange where I used my horrible spanish to communicate my message to her, and she user her comparable skill with english to ask if her english speaking sister could join us, indicating the lady across the intersection. I said of course she could, and we set off to meet her sister(the two ladies in the photo are not them, just a random photo I find on photobucket).

We continued to have a funny ‘spanish 101’ conversation where we both talked about the weather. I took two semesters of spanish in college and it finally paid off! After a bit more awkward spanglish we met up with her sister and headed off to lunch.

As always, this is where things got interesting. Turns out they were both mothers. Their husbands were off looking for work, and both family units lived with the father of the two mothers. They moved from Spain to the US two years ago, because the economy got too rough and they lost their home. They talked a lot about how they’ve been making ends meet for their kids(both had kids under a year), and it made me think about all the married people I know. To these two sisters marriage is probably just as much about survival as it is about happiness. I have absolute confidence those familes will stick together because they have to. They don’t have the kind of resources to make it on their own. Even with five working adults they’re barely making ends meet. It’s making any relationship advice I get sound weird. Not necessarily bad or good, just weird. Like hearing advice about car maintenance after you’ve been hanging out with people who have to job everywhere. The advice is still valid, but seems odd in light of the fact that transportation means such different things to different people. Not that one is necessarily inherently better or worse, it’s just some people need to jog places, and some people need to drive places.

While not homeless(they lived with their father), these ladies were equally as desperate as the last person I shared a meal with. As before they were still very polite and considerate, asking me about myself, asking me if I was okay with every stop of the money spending process, being very respectful of boundaries. They also gave me a new perspective on my own position in life(again). The first gentlemen gave me a perspective on what it’s like to be out in the elements and without medical support. The second gentlemen reminded me how thin the line is that separated me and him. Now these two ladies have made me see relationships in a new light.

As always, I would love to hear about any experiences you guys might have had with the homeless.