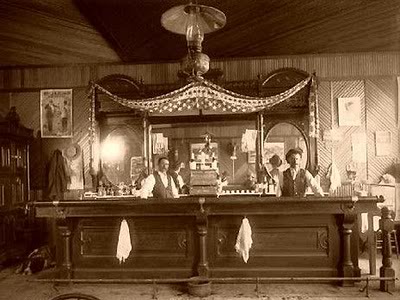 “It seems I just got out of a violent gunfight.”

“Oh yeah? How can you be sure?” The person on the bar stool buying the drink asks as the bartender slides over a beer.

“I mean there was the blacking out and waking up here part. There were a lot of shots from the sheriff, and I think maybe one hit me, but that’s not the main reason.” I tell my new found confidant.

“Then what’s the real reason.” He asks, acquiring a beer himself.

“I don’t think I wanted to survive.” I tell him. I pause, expecting him to freak out or look for the sheriff to call, or spit take his beer, or at least frown. He doesn’t do any of these things. He merely sips his beer and watches me casually as if I’m regaling him with a funny anecdote about a couple chickens chasing a dog. “See, I’ve been prairie dogging this area for a while now. I find a quiet place that hasn’t seen a lot of robbery in a while. I look around to see where there’s money, maybe a bank, maybe a mine, maybe just cattle, and you hit’em when they least expect it.”

“Seems to be a sound method of operation.” The stranger sipping his beer says. He is very aptly named a strangeer, because his reaction is not at all what I expected. I can understand the bartender not say something, that’s kind of his job, and the other patrons of this establishment were probably out of earshot, especially with the piano going, but this guy was hearing me loud and clear. Surely the average person did not respond in such a manner to a claim of death and a life of crime, but his non-judgmental attitude spurs me on. “So what happened this time cowboy? I expect a criminal of your caliber is not tripped up by just some regular old sheriff. I reckon it would take some federal marshals to bring you down.”

“That’s the thing, like I said. I kind of didn’t want to make it. This time I was hitting up a cattle farm, not the most profitable, but if you can make off with a couple good steers the money is still decent. Everything is going alright, and then I look back, big mistake looking back. I see this old lady with her five young kids standing on the porch, not saying anything, not calling for help, just looking at me. I don’t know if the father was dead or just no there at the time, but I knew when I drove those cattle away that I was starving at least a family of five. It got me to thinking. How many other young families have I starved that were just trying to get by. I started doing the math on how much money I stole, how much everything I had taken was all worth, and the number of people was higher than you and I could count on both sets of our feet and hands.” I take a large swig from my beer.

“That’s what did me in I figure. I didn’t turn myself in, but I made a stupid mistake. I went back to hit the bank, same town. Everybody knows you don’t hit the same place twice in less than 24 hours. Sure enough the sheriff was waiting, and we go to shootin’ at each other, and well, here I am.” I take another large swig of my beer. “So you tell me stranger, what’s going on.”

The stranger puts his beer down and leans back.

“Well partner you probably got your bearings by now, so I’ll just keep this brief. You ain’t in heaven as there ain’t no angels, and you ain’t in hell because there ain’t no demons either. So where does that leave you?” I remember a preacher talking about a place like this a while back.

“Purgatory?” I ask. The stranger nods his head.

“So what am I doing here and who are you if you’re not an angel?”

“You are here son because I bet if I told you the almighty was right outside you’d hide your head in shame for what you done. As for who am I? Let’s just say I’m the guy whose going to sit here buying you beers until you forgive yourself for what you done so you can look the almighty in the eye when you move on out.”