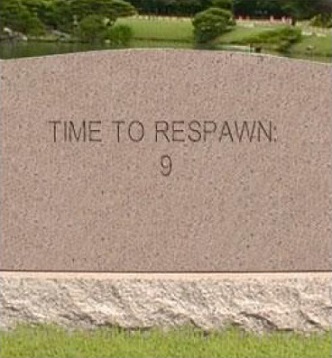 “Bob, you really shouldn’t kill yourself just to get home. You know respawns take a lot of electricity.” I advised my coworker.

“Frank, this saves me two hours of sitting in traffic, besides, it’s not like I’m paying for it.” I shrug.

“Suit yourself buddy.” Bob goes upstairs to jump off the building into the dumpster 12 stories down. The first couple of times he had missed and it had been messy for us to clean up. Now he could land smack dab in the middle and not even get any splatter on the pavement.

I keep a straight face until he’s closed the door to the stairwell, and then I burst out laughing. He doesn’t know that after he brought in those arsenic laced donuts ‘to share’, the rest of us had decided to get revenge. We had set his respawn two hundred feet above his house.

We had rigged a camera in his backyard, and any second it would be life streaming a most amusing scene. My coworkers crowd around my desk as I pull it up, and we start taking bets on how many tries it’s going to take until he manages to reset it close enough to the ground to survive.

Our boss had suggested we set the respawn point to be his mother for irony’s sake, but we figured his mom would probably tell on us.